The World That China Wants (Part I): Why Intentions Matter

There is a school of international relations theory that advocates judging the relations of states absent speculation on the intentions and plans of its statesmen. As leaders have an incentive to lie and their intentions can never really be proved one way or another, it is best for the analyst to refrain from mind-reading altogether. The analyst should focus instead on more concrete and objective measures, like military platforms or GDP per capita. This is what will actually predict how statesmen will perceive other countries and these sort of measures are the actual ones that will influence state behavior, not nebulous, unprovable assessments of intentions or ideology. This should especially hold true when analyzing authoritarian states, whose inner workings and political debates are opaque to the outside world.

I have always found this insufficient—especially when dealing with China. I thought about this earlier this week after a friend sent me the following picture, a page from Zheng Yongnian's Discovering Chinese Nationalism in China: Modernization, Identity, and International Relations. Zheng describes five "myths about China" described my American analyst Michael Swaine in 1999: 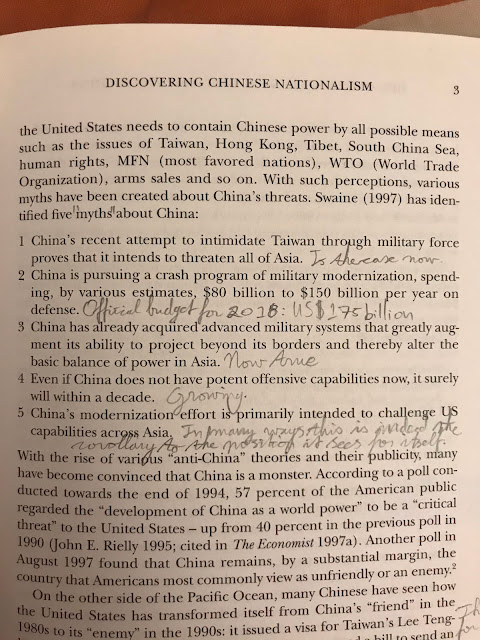 As my friend pointed out to me when he sent me this image, Swaine's list is quite remarkable. Every single one of the things Swaine described as a "myth" in 1999 is now indisputably true! This should give you pause when you read Swaine's 2019 proclamations that China poses no threat. But I bring this up to make broader point:  only looking at the current capabilities of the People's Republic of China and the Party that directs it can be deceiving. If in 1999 an observer were to look solely at the PLA's existing ability to "alter the basic balance of power across Asia" or "challenge U.S. capabilities across Asia,"  she would have had to agree with Swaine. The PLA did not have anything close to that kind of power. But if instead of looking at material capabilities the analyst of 1999 had pored over CPC speeches and planning documents, a different picture would have emerged. The purpose and nature of the PLA's build-up — a build up that has reshaped geopolitical realities across Asia dramatically since Swaine wrote his defense of the Chinese Party-state  — was telegraphed in these sources long before the PLA had the technology or expertise to realize them.

I see similar problems in all sorts of debates about the nature of various PRC projects. When Samantha Hoffman, for example, warns about the potential terrors of the Chinese social credit system she is sometimes met with objections from people who have experienced this system on the ground. It isn't actually one "system" but an ugly, mismatched patch-work comprising a dozen different systems that cannot communicate or coordinate with each other. The social credit system of 2020 is to Black Mirror what a super-soaker is to an AR15. But Hoffman has spent her career immersed in parsing out the meaning of Party security documents. Her focus is not on the current capabilities of the social credit system but the ultimate intentions and ambitions of security services who have been happily pushing social credit along.

Now you can take this line of thought too far: America had lots of grand intentions in Afghanistan, but never had the capacity to realize them. Honest assessments of intentions must be met with accurate assessments of actual capability. However in foreign policy circles it often seems that more effort and energy is put into the latter. When it comes to China, this strikes me as an extraordinary mistake. For the Communist Party of China is not an inscrutable black box. The Party's leadership is stunningly transparent about their ambitions. In order to guide the behavior of their cadres, Party leaders lay out their long-term goals, visions, and plans quite openly. The speeches, resolutions, reports, and instructions where these visions are found are easy to access. Many, perhaps even most, have been translated into English. The tricky thing is that you must have the necessary grounding in Partyspeak and Party history to fully understand them.

I have struggled over the last three years or so as I have become increasingly aware of what these documents say. I am not the only one who has had these frustrations. What people assume the Party is trying to do and what it is actually trying to do are not the same. But there is no one single document that reveals it all. Demonstrating the Party leadership's hopes and intentions means combing through literally hundreds of official documents to find all of the pieces of the puzzle.

But some people have done it. Over the last month and a half two of these people have openly published their attempt to put all of the pieces together. The first of these attempts is laid out in a congressional testimony presented by Daniel Tobin to the China Economic and Security Review Commission last month (and published last week). It is titled “How Xi Jinping’s ‘New Era’ Should Have Ended U.S. Debate on Beijing’s Ambitions.” Tobin's actual written testimony is only 14 pages; the remaining 21 are a meticulous set of footnotes laying out the sources for everything said in the main body of the text. The second document is Nadege Rolland's 64 page report for the National Bureau of Asian Research, China's Vision for a New World Order. Together these two reports present a compelling image of what the Communist Party leadership wants the rest of the 21st century to look like. If someone asks me, "What does China want?" these will now be the first things I direct them to in answer.

In the ideal world all China hands would read both documents in their entirety, and all people whose job tangentially relates to security or foreign policy, international trade, American electioneering, or Washington punditry would read the first 14 pages of Tobin's report. We don't live in that world, so in the coming weeks I will do my best to summarize the contents of each. This post is the first in a series. The second, "Taking Chinese Communism Seriously" will cover Tobin's testimony; the third, "Nailing Down a New World Order" will cover Rolland's report. I will conclude the series with an "implications for the current crisis" post, which will attempt to place some of the PRC's recent moves (such as stoking a conspiracy that SARS-2 came was an American bioweapon) in the context of the Party's broader aims.

Prof. Kotkin also sets out nicely why "waiting for China to democratise" is not a sensible strategy.

Eager to read your summaries of these two items.

Looking forward to the series.

The way I attempt to explain the Beijing regime's strategic aims is that, with a cover of Marxoid rhetoric and the addition of Leninist Party dynamics, it seeks to re create a bog standard Middle Kingdom tributary state system but with much wider geographical reach due to the expansion of technology.

That the Chinese ambassador to Australia threatened a boycott of Australian goods (China is Australia's top trading partner) over the Morrison Govt's call for an open enquiry into the origins of Covid-19 seems to fit nicely into this -- tributary states are supposed to know their place.

PM Abe deciding that the Japanese government will subsidise the movement of manufacturing out of China is choosing resilience over efficiency. This choice is typically a risk trade-off. A system that systematically chooses efficiency over resilience, will become highly efficient but very unresilient. The current pandemic has been a bit of a reminder of that, and that there is often a trade-off between the two.

Regarding Point 2 about Budget from the linked image in article.

Chinese 2020 GDP in 2010 Constant Dollar terms was $140.5 Billion, meaning still lower than the figure printed in 1999 article. Plus with inflation dynamic the statement would still be relevant enough.

There is only so much one can use the narrative framework of, Look what they were saying.
So what, China says a lot of things, where is the analysis about things, projects, proclamations which China and its leaders across the hierarchy have said and never come to fruition or been delayed for too long.

Action is and will still be the highest level arbitrator of Intent/Will than Rhetoric.