The United States could bounce back from the fall of Taiwan to Communist rule. It would have far more dire consequences for Japan. Consider this post a short, informal primer on why this is so.


The Course Book on the Taiwan Strait's Military Geography is a restricted-access PLA manual, used to teach senior officer seminars in Beijing… This source [informs] readers that Taiwan is a chokepoint of great utility for blockading Japan. The Taiwan Strait, it notes, is a Japanese maritime lifeline that runs from Europe and the Middle East, and based on PLA studies, Japan receives 90 percent of its oil imports, 99 percent of its mineral resources, and 100 percent of its nuclear fuel needs from ships that travel across these sea lanes. In total, 500 million tons of Japanese imports pass by Taiwanese waters each year, with 80 percent of all Japan’s container ships traveling right through the Strait, the equivalent of one Japanese cargo ship every ten minutes. Consequently, these waters will, “directly affect Japan’s life or death, its survival or demise.”

PLA intentions and plans for a conquered Taiwan are made plain in another internal document, The Japanese Air Self Defense Force, a handbook studied by mid-career officers at the PLA Air Force Command College in Beijing. The stated purpose of the text is to help Chinese pilots and staff officers understand the strengths and weaknesses of their Japanese adversaries. Buried amidst hundreds of pages of detailed maps, target coordinates, organizational charts, weapons data, and jet fighter images are the following lines:

As soon as Taiwan is reunified with Mainland China, Japan's maritime lines of communication will fall completely within the striking ranges of China's fighters and bombers...Our analysis shows that, by using blockades, if we can reduce Japan's raw imports by 15-20%, it will be a heavy blow to Japan's economy. After imports have been reduced by 30%, Japan's economic activity and war-making potential will be basically destroyed. After imports have been reduced by 50%, even if they use rationing to limit consumption, Japan's national economy and war-making potential will collapse entirely...blockades can cause sea shipments to decrease and can even create a famine within the Japanese islands. [1]

The first PLA document Easton quotes here has the statistics slightly wrong: the larger part of Japan's energy imports travel to the south of Taiwan through the Bashi channel, in the Luzon strait.[2] To get a sense for what those shipping lanes look like, here is a map of A.P Moeller-Maersk, Mediterranean Shipping Co. and CGM SA's Japan bound shipping routes:


The Luzon Strait, you will notice, also runs directly adjacent to Taiwan. Chinese control of Taiwan would—in event of conflict—force Japanese shipping out of the South China Sea entirely. This in itself is not a death blow: at some cost, sea traffic that now passes through Malacca and runs adjacent to Taiwan could be rerouted through the Sunda Strait and up the east coast of Mindanao. I am sure someone in Japan must have calculated the likely economic costs of rerouting Japan-bound traffic this way (or in a more extreme circumstance, replacing Middle Eastern energy supplies with North American ones) but I have not yet seen any actual numbers. But given alternate sea lane possibilities, I doubt clearing Japanese shipping out of Taiwanese waters entirely would be enough to threaten Japan with "famine."

But the problem posed by Chinese control of Taiwan is not really limited to the shipping that passes through the Taiwan and Luzon Straits. Navalists like to talk about what they call the "First Island Chain," a group of islands that keeps the PLA Navy and PLA Air Force hemmed into the East and South China Seas. These islands include the Philippines Archipelago, Taiwan and the Pescadores, the Japanese Archipelago, and the Ryukyu Islands, which are Japanese territory. Here is a map of that last group:

In times of peace there is little to stop Chinese naval and air forces from crossing out into the Pacific as they wish, but in times of war things will be different. Over the last few years the Japanese have been quietly stocking these islands with anti-ship and anti-air missile units; were war imminent these deployments would grow. It is very difficult to imagine a significant number of Chinese commerce raiders slipping out to prey on Japanese shipping outside the Taiwan Strait as long as they have to slip between hostile Japanese and Taiwanese island bastions.  It is very easy to imagine this if the Taiwanese side of the equation is no longer hostile to Chinese forces.

This is true for several reasons. One of the more interesting ones involves submarines. Look again at the image at the top of this post; that is a seafloor depth map of the West Pacific. You will notice that the water east of the first island chain is much deeper than the water west of it. This has very practical implications for submarine warfare. The prime reason the Chinese built their most important submarine base in Sanya is because it allows the submarines harbored there to slip into the deeper waters of the South China Sea where detection is far more difficult. For China, this is the cornerstone to a credible seaborne nuclear "second strike." If the Chinese had direct access to the western Pacific—the kind of access possession of Taiwan would give them—their nuclear armed submarines could roam freely across the globe. It would also make detecting and tracking submarines tasked with commerce raiding far more difficult.

The loss of Taiwan would also put to question Japan's ability to hold and defend the Ryukyu islands altogether. Yonaguni, at the tail end of the Ryukyu chain, is less than 70 miles away from Taiwan's east coast. That is almost one fourth the distance between the island and the Chinese coast (approx. 250 miles), and one fifth the distance between the island and Okinawa (330 miles). Okinawa itself is closer to Taiwan's north coast (approx. 370 miles) than it is to the Japanese Archipelago proper (approx. 480). If Taiwan were in hostile hands, Japan would be fatally vulnerable to an island hopping campaign that would rob it of the ability to control its near sea lanes.[3]

Japanese naval leaders understand this. They always have. It is why the Imperial Japanese Navy insisted upon Taiwan's annexation in 1895, and it is why Taiwan contingencies have been an important part of the Self Defense Force's thinking since the 1950s.[4] They understand—even if most Japanese civilians do not—that the loss of Taiwan would give the Chinese incredible leverage over Japan.

As a final note: while preparing this post I came across a map of all of the currently existing submarine cables that run next to Taiwan. You will notice the great number that run through the Luzon Strait: 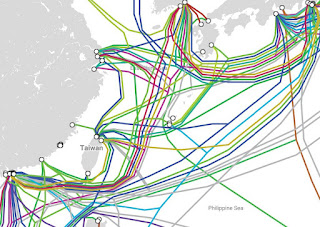 A decade ago an underseas earthquake in the strait knocked out the internet in Taiwan, Japan, South Korea, and Eastern China. I will admit that I do not know how easy it would be to isolate the cables headed towards Japan and knock them out of service, but I am interested in finding out. If you work in that industry or have expertise in underseas infrastructure, please sound off in the comments!

[3] The Senkaku Islands are also easier to assault from Taiwan than anywhere else. However, I tend to agree with Todd Hall's assessment that the Senkaku island dispute is more about the symbolics of honor than strict military utility. See Hall, "Why the Senkaku/Dioyu Islands Are Like a Toothpaste Tube," War on the Rocks (4 September 2019).

Easy to find the cables and knock them out of service.

However there are lots of cables directly between the USA and Japan so the impact of taking out the cables would not necessarily be severe.

A lot of internet resources are also available locally because they will be hosted in the AWS data centres in Japan.

Ultimately I think taking the cables offline would be significant symbolically and cause some short term disruption but have minimal real impact.

Even worse is the Philippines falling into Chinese hands. Which is what Duterte is now allowing.

While I agree that many have forgotten or simply choose to ignore Taiwan's geographical strategic importance to the U.S. in the Asia-Pacific region, this is hardly a new viewpoint nor one ignored by many in the military and intelligence fields who focus on this region. William Sebold once recorded General MacArthur's 1949 brief to the State Department on Taiwan (Formosa), an analysis that is just as true today as it was then:

"[MacArthur] said that if Formosa went to the Chinese Communists our whole defensive position in the Far East was definitely lost; that it could only result in eventually putting our defensive line back to the west coast of the continental United States. . . He pointed out that Formosa was astride the lines of communications between Okinawa and the Philippines, that it outflanked our position on Okinawa and, in the hands of the Chinese Communists, broke through the island wall which we must have along the Asiatic 'littorals' in order to maintain in a strategic sense a defensive line in the western Pacific."

There is no doubt that Taiwan is a strategic location. But it was bypassed in WW2 by the Allies and Okinawa was taken. So it is not the only location that can block Japan's supply lines. In fact, there are so many locations you could use to block those supply lines, it is not clear why Taiwan should be considered a necessary (as opposed to sufficient) condition to blocking them.

In addition, although it is not particularly well known, the weapon that totally destroyed Japanese commerce was not submarine torpedoes, but the late war magnetic mine campaign referred to as Operation Starvation.

The Chinese have shown a lot of interest in mine warfare as an equalizer to deal with the larger United States Navy. Although rocket assisted mines increase the depth that mines are useful at, those very same shallow waters are the fertile area for modern sea mines that sit on the ocean floor and rise up when the appropriate "signature" activates them.

Given that modern submarines, even diesel-electrics, are very expensive the Chinese would likely make heavy use of sea mines to blockade Japan. The alternative of an active blockade off the coast against a Japanese Navy that specializes (not surprisingly) anit-submarine warfare would not be a particularly palatable strategy.

Since the Japanese no longer have a navy that can defeat the Chinese one-on-one, they have no good strategy for dealing with a Chinese military threat. Taiwan does cork a bottle. But it also forces a very forward deployment to maintain control of it. It is very similar to the situation with the Philippines at the start of WW2. The US planned to concede their loss (after hopefully slowing down the Japanese more than they did), with the US defeating the Japanese in more neutral waters and retaking them. An all-in forward defense was not considered feasible.

In following, Page 4 (labeled page 6) shows the Japanese sources of LNG. As you can see, unlike oil, LNG comes from a number of different places. The Middle East is not nearly so critical. With the Russians being one of the main suppliers, the Chinese might have a hard time cutting that source off.

Japan is one of the more vulnerable countries to a blockade. They need to import all sorts of stuff. And to pay for that stuff, they need to export a lot as well. So any sort of blockade is going to hurt them alot.