Comparing our times with those gone by can be useful - but only if we remember what made those days different than our own. When we forget those differences then our analysis is fruitless. Attempts to understand economic inequality in 21st century America by comparing it with its ancient precedents inevitably runs befoul this truth.

Over at Breviosity, Martin Hewson links to an essay by Peter Turchin that was published in Aeon Magazine last month. Mr. Turchin is one of the founding fathers of cliodynamics, a fledgling branch of science that approaches economic, social, and political history by means of mathematical module. [1] His essay presents some of his recent research (to be presented more rigorously in an upcoming book) on cycles of inequality, changing living standards, and violence in the United States. He begins by comparing American inequality with earlier antecedents:

"A historically based model might shed light on what has been happening in the US over the past three decades...

Much the same pattern [present in American history] can be seen during the secular cycle of the Roman Principate. The population of the Roman Empire grew rapidly during the first two centuries up to 165AD. Then came a series of deadly epidemics, known as the Antonine Plague. In Roman Egypt, for which we have contemporary data thanks to preserved papyri, real wages first fell (when the population increased) and then regained ground (when the population collapsed). We also know that many grain fields were converted to orchards and vineyards following the plagues. The implication is that the standard of life for common people improved — they ate less bread, more fruit, and drank wine. The gap between common people and the elites shrank.....

As the slice of the economic pie going to employees diminishes, the share going to employers goes up. Periods of rapid growth for top fortunes are commonly associated with stagnating incomes for the majority. Equally, when worker incomes grew in the Great Compression, top fortunes actually declined in real terms. The tug of war between the top and typical incomes doesn’t have to be a zero-sum game, but in practice it often is. And so in 13th-century England, as the overall population doubles, we find landowners charging peasants higher rents and paying less in wages: the immiseration of the general populace translates into a Golden Age for the aristocrats." [2]

The rest of Turchin's essay goes on to compare varying levels of social "well being" and inequality across American history. The info graphic presented therein is worth a few minutes reflection in and of itself. The essay's only real flaw is the comparison of modern America, medieval England, and classical Rome that I have quoted above.

The problem inherit in these sort of comparisons is highlighted in my essay, "Notes on the Dynamics of Human Civilization: The Growth Revolution." During the early 1800s world energy consumption, population, and GDP began to grow exponentially. Before this exponential age human resources were essentially static. (One year of economic growth or energy use on the part of a modern, industrialized country exceeds centuries of economic growth and energy use on the part of premodern economies.) Because their resource base was static, the only real avenue to wealth was the labor of others, seized by means of taxes, tribute, slavery, plunder, or conquest. Wealth was not shared; it was stolen. [3]

But that is not how wealth is created today. Modern economics is not a zero sum game. The prosperity of modernity is not built upon limited human or animal labor, but upon the seemingly limitless engines of steam, coal, oil, and gas. This is one of the central differences between our age of exponential growth and the earlier age of static resources. In pre-modern societies wealth creation was primarily extractive. This is no longer the case. 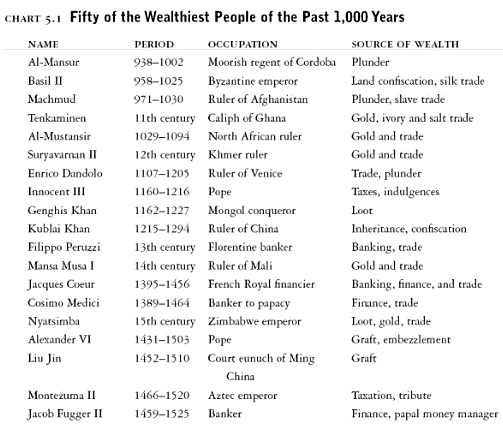 
Notice that before the late 1700s all fortunes - that amassed by the Peruzzi banking company being the partial exception - were made outside the market.

This is the flaw that handicaps comparisons between modern inequality and its ancient precedents. The unequal distribution of new wealth created by modernity's fantastic economic growth is the primary cause of modern inequality. Ancient inequality was different. It was not caused because proceeds of growth were spread unevenly across the system, for the system did not have enough growth to spread around.  Economic inequality in pre-modern societies happened because pre-modern elites extracted their wealth from the rest of the population. The dynamics of the two systems are simply not the same.


[1] http://cliodynamics.info/ has many resources for those interested in further study of cliodynamics. I have not read Mr. Turchin's vanguard works, War and Peace and War: Life Cycles of Imperial Nations (New York: 2006) and (co-authored with Sergei Nefedov) Secular Cycles (Princeton: 2009). Those of you with tight wallets (like me!) will be glad to know that much of Mr. Turchin's work is available in the public domain. The following article is an excellent example of his methods and arguments:

Significantly, this article restricts itself to 3,000 BC to 1800 AD, avoiding the problems of comparing static and exponential age empires.

[2] Peter Turchin. "Return of The Oppressed." Aeon Magazine. 5 February 2013. Mr. Turchin provides the data behind the essay in a post written on his blog, Social Evolution Forum:

[3] These ideas are presented with far more rigor and depth in the original essay. Please read it in full if the idea is new.

That's an interesting list. I agree that the way to get wealth in modernity is quite different - thankfully.

Good post. I feel that you drew out some of the limitations of any theory that tries to draw comparisons between the ancient and the modern. I feel there is a lot to learn about the present from the past, but being cognizant of the differences is essential.

This is extremely interesting, but my conclusions might not be the same. What strikes me is that almost every occupant of that list, up to and including the present, has either directly contributed 'negative labor' (theft, exploitation, etc.) or facilitated such labor (trading slaves, in this sense, is facilitating the theft of a person). It's economic rent, defined broadly, all the way down. What's remarkable is that productive advancements associated with the industrial revolution could occur despite this kind of, if you want, 'distributional' backdrop. Even consider Bill Gates--it's not entirely evident to me to what extent the computational revolution can be attributed to this man. Sure seems as if he became a billionaire in connection with his transformation of computation into a business, not with his productive contributions.

Very much enjoying your blog. Came here from your excellent review of Mark Edward Lewis' 'Sanctioned Violence in Early China,' itself a remarkable book.

"Sure seems as if he became a billionaire in connection with his transformation of computation into a business, not with his productive contributions."

Sure. But that does not diminish the point in the least. He made his money selling things, not stealing them. The profits from these sales are unequally distributed. But they were not seized. That is the difference.

Though the point made here is keenly relevant the author misses a several key consideration in analyzing how society and the masses will likely react to the expanding inequalities arising globally by essentially telling everyone they are better off than they were.. While comparisons to the past may have limited use since the wealth in question was displaced at the cost of other and not generated from accretive modern economic progress. This too is also only superficially correct. In truth the world economic systems are only functioning because the masses have bought into the value proposition of fiat currencies orchestrated by central governments and central banks. The increasingly frequent economic crisis the world is experiencing could lead to the loss of belief in these systems. In the USA these crises happen with seemingly no consequences to the banks involved. With negligible equity or cooked equity valuations, banks can borrow an unlimited supply of freshly minted dollars. The banks and the US Government get the full benefit of this new money from its first use but at the cost of the dilution of the countries distributed wealth. This is theft clean and simple no different than the displaced money at the cost of others in historical times. Significant devaluation of middle class retirement fund assets have occurred over the past two decades by the intentional or negligent mismanagement of the economic system in the United States by the Federal Reserve, Congress and Wall Street. With no accountability and no system in place that counters these increasingly common economic bubble bursts. The government stands to lose its popular support when the barons of wall street are allowed if not even encouraged to accumulate wealth through the indirect delusion of the accumulated wealth of the masses. As the economic distribution of wealth becomes ever more clear it stands to challenge the general belief that the United States is the “Land of Opportunity” When this becomes a hollow joke, we are in for a period of significant instability within society, and not just on the fringes..

There is a key missing consideration in assuming that people will accept the distorted economic distribution of wealth as “they are better off than they would have been.” This consideration is quantifying the effect of education, the masses today are not surfs. The inequities will become very offensive to an educated majority once they realize the game was engineered so that they could never win or truly even get ahead.

on the previous post ....dilution not delusion .. spell check got me ... but i think that should be clear